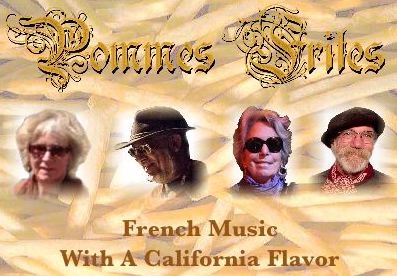 The repertoire of waltzes, polkas, mazurkas, schottishes, bourree's and songs evolved from village dances and minstrel tunes since the Middle Ages. In the French countryside, bagpipers, hurdy-gurdy players, and sometimes a solo fiddler played for all important occasions and were local heros. Very lively music to add spice to any event.

Debra has been playing the folk music of rural France on Hurdy Gurdy (Vielle-a-Roue) since the early 1980s’, when she was apprenticed to the legendary player Arrigo D’Albert. She has taught French song, fiddle style, dance and Vielle at Lark in the Morning music festival and appeared on Prairie Home Companion as a member of the group TOUR de FRANCE, whose CD is available at performances. She has studied in France and produced festivals bringing some of France’s most exciting players to the US. Debra is a passionate and expert interpreter of the robust, lively dance repertoire of the center of France, as it emerged from the Middle Ages and continues in a vibrant contemporary style.

Debra Dawson plays Hurdy Gurdy, Violin and Viola and sings in this ensemble. Debra can also lead traditional French dance for all events.

Brian Steeger studied traditional music for 35 years with the great masters of music and dance from the America’s, Europe, Central Asia and Indonesia. As a co-founder of the “Alta-California-Dance- Orchestra” or “TACO” he was awarded a California Arts Council grant for his work in reviving old California music. Together with his wife Marianne, he was a musical director of El Teatro Campesino’s winter productions. He is now living in Fort Bragg with his wife, Marianne and together they continue to play traditional music of Europe and the Americas. Brian performs on Violin.

Marianne Steeger, is an accomplished musician on button accordion, percussion (Mid-Eastern darbuka and side drum for historical reenactments) and vocals. She's performed with the San Juan Bautista, California El Teatro Campesino’s winter productions of La Virgen Del Tepeyac and La Pastorela for 10 years (1989-1999). During this time she became a musical co-director with her husband Brian. Marianne has sung with San Benito County’s Oriana Chorale with performances at the San Juan Mission, and is also involved with The Alta California Orchestra, a group that features the music of California 150 years ago. She is continues her musical adventures by playing the older-style European and American dance music. Marianne performs on Button Accordion.

Mickie began playing guitar as a teen but soon became interested in other instruments. Before the age of 20, he was teaching guitar to 45 pupils a week, had studied sitar at Ravi Shankar's Kinnara and was playing almost every instrument that sported strings and frets. He started playing the flute and bagpipes in his early 20's and has become accomplished on many wind instruments. Mickie's interest in Irish music was fi rst inspired by the legendary Irish accordion players Joe Cooley and Kevin Keegan, with whom he performed for many years. Mickie founded Lark In The Morning, an international business that specializes in rare and unusual musical instruments. He is a musical instrument collector, and a videographer specializing in traditional music and dance. He has performed with the "Golden Toad," "McClouds Ceili Band," "Take A Dance," "Mickie & Elizabeth" and "Mooncoin." Mickie developed an interest in French when he started playing with the famed hurdy gurdy player Arrigo D'Albert Mickie Zekley in this ensemble performs on Harp, Nyckelharpa, Wooden Concert Flute, Cornemuse du Centre (French Bagpipes) & Guitar


The music we play comes from the traditions of Ireland, England & France.

We all love playing for weddings, dances, parties.

We work with a number of dance instructors that can bring a group of people together. A great way to introduce family and make new friends.

Come To Lark Camp Where You Can Learn The Music We Play Held each summer at the Mendocino Woodlands.